Article by Katie Cosner for AGBeat 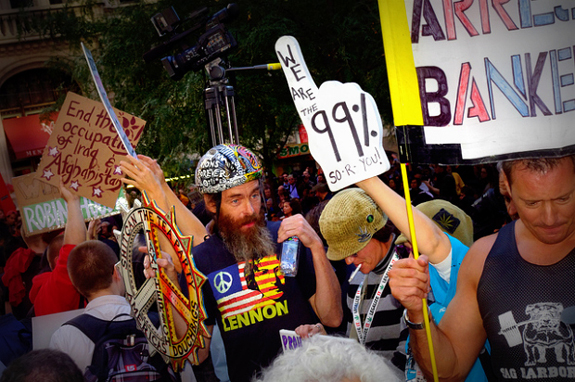 Some (like the Occupy Wall Street protesters) will disagree, but there have actually been good, if notnecessary improvements born of the housing crisis. Many will not recall this fiasco, but there was a time when tenants were getting the boot while paying rent to landlords who were pocketing the cash, and yet skipping out on mortgage payments. Tenants have real rights now. If a foreclosure happens, they can stay through the end of the lease, and sometimes longer.

There are also at least 12 different government sponsored programs to help prevent foreclosure.TWELVE. These are in addition to the now traditional foreclosure avoidance methods that we have been using such as short sales, deed-in-lieus, loan modifications, interest rate reductions, mortgage cram downs, banks and servicers own in-house loan programs, and even short-refis are being used. When one of the programs recently expired with much of the funds being unused, we called it another failed initiative, like HAMP.

Last week, there was a photo shoot by John Moore in the Washington Post, on a family getting kicked to the curb via an eviction. They had an income loss, didn’t pay the mortgage for 11 months, and the wife didn’t tell her husband until the Deputy Sheriff came knocking with the final eviction notice. Yes, she was ashamed, embarrassed, whatever. There were at least 12 things she could have attempted to help her and her family, other than nothing. See above.

Enter the Occupy Wall Street movement, which is like the epitome of the I Want (Deserve) It Now Societywe’ve become accustomed to – without actually doing or working for anything, and it’s such bull. These groups are out there protesting for everything, and I do mean everything… the war, foreclosures, money for ecological items, gender equality, taxing the rich, jobs, spreading the wealth, free healthcare, corruption everywhere, free college education, politicians, getting rid of credit agencies, corporate greed, eliminating *all* loans, big banks, bail outs, unemployment, raising the minimum wage to $20.00/hour regardless of employment, and God knows what else.

They want resolutions, and they want them now. Sorry, Rome wasn’t built in a day.

What got us here and what is next?

All of the crises which got us here- and the sleezoids who participated in them- didn’t screw everything up overnight, nor will they get their comeuppance all at once. The current programs and policies are designed to help distressed homeowners and there are more in the works for the future, as well as the money to finance them. It’s not as though the powers that be have a magic lamp with a genie inside granting unlimited wishes to conjure all of these programs up, it kind of takes time. A homeowner also has to toss out a little effort; they can’t just bury their head in the sand and hope for a miracle to arrive like a stork with a bundle of joy.

Protesting with no clear agenda at hand is one of the most confounding things I’ve ever heard of; doing absolutely nothing to help one’s self is one of the dumbest things I’ve heard of. There is a saying that I believe applies to these two scenarios: You can’t fix stupid.

Katie Cosner, occasionally known as Kathleen, or KT, is a Realtor® with Cutler Real Estate and is active in her local Board of Realtors® on the Equal Opportunity & Professional Development Committee. She has been floating around online for a number of years, and is on facebook as well as twitter. While Katie has a few hardcore beliefs, three in the Real Estate World to live and die by are; education, ethics, and the law – insert random quote from “A Few Good Men” here. Katie is also an avid Cleveland Indians fan, which really explains quite a bit of her… quirks.